Sri Thendayuthapani Temple is one of the oldest temples and is popular amongst all races. The temple has a long history and is well managed by the Chettiars Temple Society (CTS).  The Nagarathars of the CTS are well known for their philanthropy, community services, building temples and involvement in other religious activities across the globe. The main deities in the temple are: Sri Thendayuthapani, Sri Sundareswarar and Sri Meenakshi Amman.

One of the oldest temples with more than

160 years in spiritual and community services 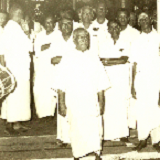 Prior to 1859 Nagarathars who were in Singapore, worshipped a Vel (spear), a representation of Lord Muruga, under a tree where they offered their prayers. The Vel was kept under a Pipal tree (Arasa maram) at the bank of a tank (pond). Fresh water from the hill where the Central Park is now, emerged as a waterfall and filled the tank. Chettiars took bath there before offering their prayers to the Vel. The location was ideal for the establishment of a temple. The railway line nearby also provided an excellent form of transport to and from Malaya where they had also established their businesses. 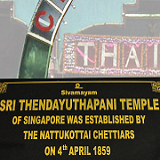 Sri Thendayuthapani Temple was built on 04.04.1859. This is reflected on the slab stone at the entrance of the Temple. This implies that the building works should have started one or two years earlier. Chettiars community bought the land, where the present temple stands, from the estate of Mr Oxley, the first Surgeon General of Singapore. The temple in its original form was of a simple structure. At the entrance to the temple, there were  two raised platforms commonly found in Chettiar households in Tamil Nadu, India. It had an alangara mandapam and an artha mandapam. The alangara mandapam was used to house the decorated deities on special occasions while the artha mandapam was the centre hall leading to the main sanctum 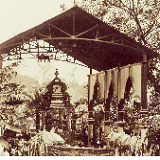 In 1878, two separate sanctums were built for Lord Sundareswarar and Sri Meenakshi Amman (incarnation of Lord Sivan and Goddess Sakthi). Later, all other important deities including the Navagrahas were erected.

The temple underwent renovation, restoration works and the consecration ceremony was held in a grand manner on 02.02.1936.

In this year, renovation and restoration works were carried out once again. The consecration ceremony was held on 07.07.1955. 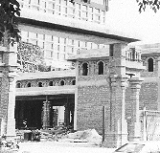 Nagarthars felt the need to upgrade the temple with modern facilities to address the increased needs of the devotees. They rebuilt the temple at the same site. 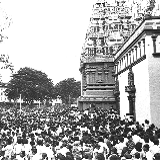 The Kaarthigai Kattu, erected in 1859 was demolished 122 years later in 1981 to make way for the Chettiars Wedding Hall and Car Park. Food is served at the ground level of the wedding hall on days when Kaarthigai is observed and on other occasions. The piling work started on 04.01.1981 and was completed on 19.01.1983. The temple was to be in the centre with a wedding hall and staff quarters flanking its sides. A two storey staff quarters was also built at about the same time. An imposing Raja Gopuram (entrance tower) was erected. It is 75 feet high and is one of the tallest gopurams (tower) in Southeast Asia. As one enters the temple through the tower gate, the temple opens into the artha mandapam, the alangara mandapam and an office on the right and a library on the left. Consecration ceremony was held in a grand manner on 24.11.1983. 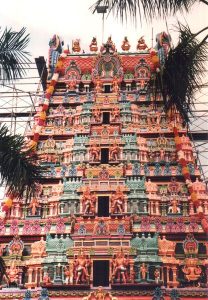 The temple was consecrated again on 29.11.1996. Gold and silver medallions were released to commemorate the occasion. 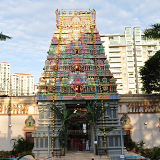 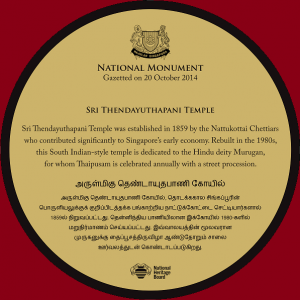 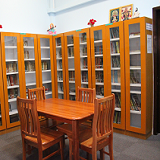 Sri Thendayuthapani temple had a long history of having a library right from early years. It is the only temple in Singapore to have such a credential. The library has an extensive collection of books over a 120 year period. The refurbished library, opposite to the lift lobby in the Annex building, was opened by Sri R. Jeyachandran, Chairman, Hindu Endowment Board.  The library has books on various historical topics, which attracts readers on a regular basis.