Sri Layan Sithi Vinayagar Temple is in China Town at the junction of Keong Saik Road and Kreta Ayer Road. Hence it attracts people from other races including international visitors. This temple is administered by Chettiars’ Temple Society run by Nagarathars, who are well known for philanthropy, community services, building temples and other religious involvement across the globe. The main deities in this temple are: 3 Vinayagars, The Holy Vel (Spear), Naagar and Rama Naamam.

There are many forms of worships such as: Participating in prayers,  Circle around Sanctum (Pragaram), Voluntary service in the temple, Chanting of Vinayagar Namam and click here to know more about offerings to Lord Vinayagar,

of remarkable history in religious activities 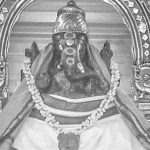 At the end of the First World War, Nagarathars took the possession of the temple which had an Attap Roof (roof made of metal sheets) and with idols of Lord Vinayagar and Naagar (Snake God). 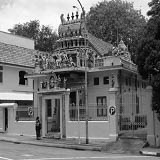 The Government acquired the temple land as part of the Hospital extension plan and gave a sum of money to the Nagarathars. The Nagarathars then bought the current land to build the temple.

The First consecration was done on 01.06.1925.  Nagarathars built the temple grandly by spending a huge amount of money. During the construction of the new temple, they found the Vinayagar Idol at the old temple near the hospital in a dilapidated condition. So, they decided to bring a new Black Stone Vinayagar Idol from India. As per the religious agamas (Procedures), the dilapidated idol was to be immersed at sea. But few Nagarathars felt that it would be a breach of promise made to Thiru Ponnambala Swamigal. Hence the Nagarathars decided to install the new Black Stone Vinayagar Idol as the main deity and at the same time the old idol was also installed in front of the main deity at the sanctum. Similarly, the Naagar and "Rama Namam" were also installed in the sanctum next to the Vinayagar. In addition, the Nagarathars also installed a Holy Vel (Holy Spear) symbolising Lord Muruga. This new temple was called "Layan Sithi Vinayagar Temple" as it was located at the "Sepoy Line" (army quarters). After the new temple was built, the Nagarathars started the practice of Silver Chariot Procession adorning Urchavar Sri Thendayuthapani to Layan Sithi Vinayagar Temple on the day before Thai Pusam. The procession will start from Sri Thendayuthapani Temple at Tank Road and go through Market Street, a business spot of the Chettiars and finally reach Sri Layan Sithi Vinayagar Temple. This same day evening the Chariot will return back to Sri Thendayuthapani Temple with the Holy Vel and Urchavar Sri Thendayuthapani. 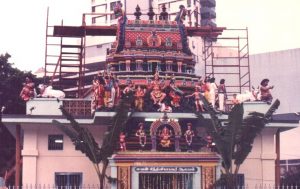 Temple was renovated and consecration was performed in a grand manner on 14.11.1975 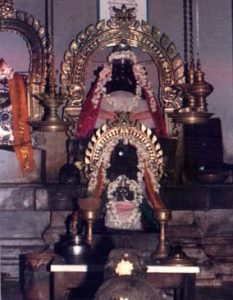 The Nagarathars who were doing pawn broker business at Kittangis (Warehouse shops) had with them idols of several deities for daily worshipping.  One of those Nagarthar, Mr. Pichappa Chettiar was well known in the society at that time.  He also served as the trustee of Tank Road Sri Thendayuthapani Temple for some time.  He donated his Vinayagar idol to the temple when the government acquired the Kittangis that were functioning at Market Street. This idol was also installed as the third Vinayagar idol at the temple’s sanctum. 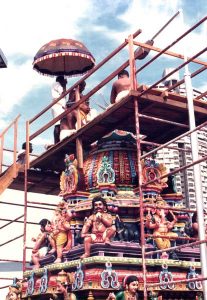 Temple was renovated and consecration was performed in a grand manner on 10.11.1989 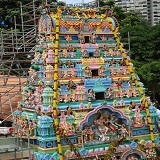 The consecration was done in a grand manner on 16.12.2007.  Nagarathars spent almost S $ 3.5 million in redesigning and renovating the temple. A beautiful 5 storey Rajagopuram has been added and side walls have been removed to have an open concept inner-pragaram.  A wedding hall with a seating capacity of around 120 is available for conducting religious and family functions. Although the temple is located at the busy and bustling China Town, the inner-pragaram (the path encircling the main sanctum) is very calm and is suitable for meditation. 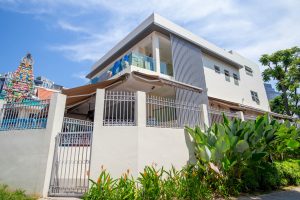 As more and more people visit the temple, a double storey Annexe building was built, adjacent to the temple to accommodate devotees to conduct Special Poojas & Functions. 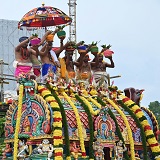 Temple was renovated and consecration was performed in a grand manner on 15-12-2019.